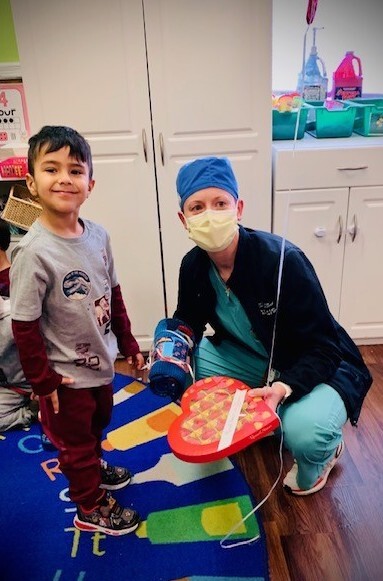 KANSAS CITY, Kansas – A University of Kansas Health Services nurse went out of her way to serve a local family.

It all starts with a growing, mixed family.

Steven Rodriguez found the love of his life, Ashley. She came with an added bonus from her 5 year old son, Joel.

“We pretty much knew it was going to work,” said Rodriguez.

The two got engaged and currently have a little girl on their way.

Things were going great for the trio, but a day in the park turned their world upside down.

The 5 year old called 911 to help his mother. Help came and they took her to the University of Kansas Health System.

“She went 25 minutes with no oxygen or blood flow to her body,” said Rodriguez.

Ashley is now in a vegetative state in the healthcare system.

Her fiancé said that in a few weeks after the birth, he will discuss with her doctors what to do next.

“He doesn’t really get it, but he has an idea, if someone asks, he says, yes, my mommy is in the hospital and asleep,” said Rodriguez.

While all seemed lost, a nurse in the hospital noticed something.

“Just because of when she came in, we’d spent a couple of weeks worrying about it, and I learned that Valentine’s Day was approaching. It’s extremely important to her and her son, and they had that special little bond, ”said Casey Pickering, an intensive care nurse at the University of Kansas Healthcare System.

After caring for patients during a pandemic, Ashley’s nurses stepped in to brighten little Joel’s life.

“With the help of some of my incredible colleagues here, we were able to figure out how to surprise him at his daycare center, get Spiderman over to him and bring some goodies to his classmates and bring a special Valentine’s Day note from his mom,” Pickering said .

The special holiday brought much-needed joy to the family.

“He loved it. He loved every second of it. He thought it was great,” said Rodriguez.

It is also a moment Pickering will not forget.

“It’s a calling. It’s a passion and we want to make a difference and we want to change people’s lives, ”said Pickering. “We want to show up really meaningful paths for them and we want to bring joy in the face of tragedy. and you know, if I’m really honest, I just as badly had to pick myself up. ”

Pickering hopes Joel will remember his mother’s love for him instead of her being sick in the hospital.

“I hope he remembers that he had a lot of people who cared so much about him and his mother and wanted to make a difference and wanted to make this incredibly challenging, life-changing experience and situation a little better for him, give him” a last really positive memory to remember his mother, “said Pickering.

This story was originally published by Jordan Betts at KSHB Scripps Station in Kansas City.