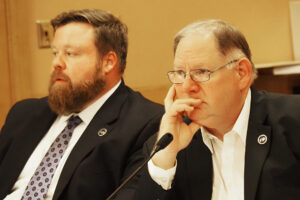 TOPEKA – Kansas lawmakers on Friday extended the state of emergency for the pandemic to June 15, ending the eviction lock, despite the governor requesting a 30-day extension.

In a brief meeting, House and Senate leaders discussed the benefits of extending the declaration of emergency until June 27 – as requested by Governor Laura Kelly – or a shorter option. The statement enables the state emergency department to coordinate efforts to combat the coronavirus pandemic.

Democratic members of the Legislative Coordinating Council argued that given current vaccination rates and COVID-19 case numbers, it is premature to cut the expansion of the state of emergency in half. However, members of the Republican Council said the emergency had lasted long enough and the state should focus on creating an “exit strategy”.

“When Kansans get back to normal, they expect us to do the same,” said Senate President Ty Masterson, a Republican from Andover. “Today’s short-term extension gives the governor the remaining time to resolve the emergency. It also clarifies that unnecessary or onerous executive orders will be canceled.”

The council, made up of eight members of the House and Senate leadership, voted 6-2 in favor of the shorter extension. They also looked at an amendment that will ensure that the governor’s order to ban evictions ends on Friday.

The declaration has been in force since March 12, 2020. Since the pandemic began, the Kansas Department of Health and Environment has recorded 313,997 COVID-19 cases and 5,076 deaths.

Completion of the appointment too early would result in a loss of government pandemic aid and difficulty in properly delivering medical services, said Tom Sawyer, chairman of the minority House of Representatives. He said he was concerned that without the help of the National Guard, which helped administer over 2 million doses of vaccine, Kansas would be “months behind schedule”.

“We all want to get back to normal, but if we end the declaration too soon it will ultimately take us longer to get there,” said Sawyer, a Wichita Democrat.

Without National Guard support, Sawyer claimed it could take up to 14 months for the state to get a 75% vaccination.

The other Democrat on the panel, Dinah Sykes, chairman of the Senate minority, said the 15-day extension does not offer a real exit strategy to ensure that the health and economic consequences of this crisis are addressed. Sykes, a Democrat from Lenexa, also lamented the lifting of the foreclosure and eviction ban, which was little discussed during the meeting after what appeared to be technical difficulties with the Zoom call.

“After a session of huge multinational corporate tax breaks and corporate pandemic breaks, it is cruel not to give an exit strategy to hardworking Kansans who are struggling to make ends meet because of the economic impact of this pandemic on our state.” Said Sykes.

House majority leader Dan Hawkins, right, was concerned about the continued expansion of the state of emergency. He argued the state was using it as a crutch rather than devising a real exit strategy. (Sherman Smith / Kansas reflector)

Legislators may need to consider extending it later in June if the governor so requests. With discussions nearing a definitive end, it seems unlikely that they would approve another extension.

House Majority Leader Dan Hawkins, a Republican from Wichita, said so during the debate and firmly opposed another 30-day extension. It remains clear that there is no intention or plan to end this emergency statement, he explained.

In a statement, Reeves Oyster, spokeswoman for Governor Kelly, said the continuation of the disaster statement was of clear importance to getting Kansas back to normal. Shortening it would jeopardize the recovery process, she said.

“As we are finally recovering from this global pandemic, now is not the time to kick people out of their homes. Governor Kelly will continue to focus on doing the right thing – not what is politically favorable, “Oyster said.

The NFL is giving 18 College of Kansas well being care...