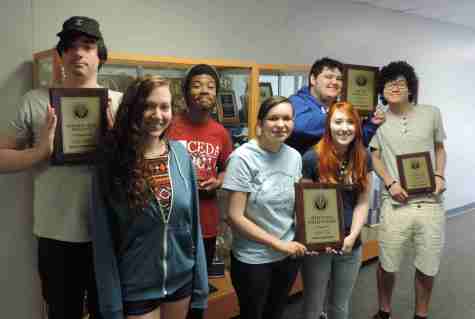 by Kelly Rogge
The Kansas Community College debate team in Kansas City had a busy few weeks. And as the group celebrates the end of their season, they celebrate again as national champions.
KCKCC won its 11th straight national title in the debate at the Phi Rho Pi Community College national tournament in Denver, Colorado. There were 100 teams participating in the tournament in the Parliamentary Debate Department, and when all the competitions were over, KCKCC was on top. Additionally, Matt Casas and Anthony Joseph’s team won gold in the same division, and assistant coach John Bretthauer, a KCKCC alum, received a coaching scholarship award.
“I’m not surprised at how well our debaters did at the tournament because they perfected adaptability,” said Darren Elliott, KCKCC debating coach. “I know we have talented people and they used their own creativity to be successful.”
The parliamentary debate is a different kind of debate than the KCKCC is used to in tournaments. Instead of preparing for a single argument before the tournament, the debaters have 15 minutes to prepare for the round, and the topics are constantly changing.
What makes the win even more surprising is that this is the first time Casas and Joseph have debated as a team. Casas was successful with partner Brian Gonzaba throughout the 2013-14 season. The couple even qualified for the National Debate Tournament and finished fifth overall in the national rankings with Harvard University. KCKCC is the first community college in NDT history to qualify for three consecutive years, and KCKCC was the best community college overall. The tournament took place from March 28th to March 31st.
“We were shocked. We expected to do well but never expected to make the eliminations, let alone the whole thing. It felt really good, ”said Casas, a graduate of Milliard South High School in Omaha. “I think we really had to be willing to compromise and learn as partners. We had a routine with Brian. We felt good. With Anthony, we both had to be more open to trying new things. “
Joseph said the biggest challenge of the tournament is learning how to adjust to the judges and make adjustments each round.
“I thought it was fun, but matching up with the judges was our biggest concern,” said Joseph, a graduate of Little Rock Central High School. “I think communication was super important. We had to keep talking after each lap to make these adjustments. That really helped us. “
In addition to Casas and Joseph, Ashley Shockley, Homeschool, and Chris Miles and Michael Smith, both graduates from Fort Osage High School in Independence, attended Phi Rho Pi. What made Shockley’s experience a little different was that she was matched for the parliamentary rounds of debates with another debater from El Camino College in California.
“We had some very fast practice laps and tried to spend as much time together before the laps started,” she said. “We talked about things that we could improve, but from the start I didn’t know her style and she didn’t know mine. Not only did we have to adapt to a new style of debate, we also had to adapt to one another very quickly. It was an interesting but fun experience. “
Before Phi Rho Pi, KCKCC participated in the CEDA Nationals, which are open to any two- or four-year school. Katie Ford of Fremont High School in Fremont, Neb., And Alex Glanzman of Lawrence High School made the top 32 before being eliminated from the University of Oklahoma. Casas and Gonzaba were eliminated in the top 16, also from OU. Overall, KCKCC won the national title in the Community College Division for the ninth time in the past 11 years.
Additional awards were given to Ford, 9th Speaker, and Casas, CEDA All American. This is the first time KCKCC has had someone in the top 20 of the CEDA Nationals.